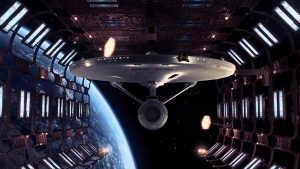 Lists.  We love ’em, we make ’em, we argue over ’em, we share ’em.  And every now and then, we see a list that just demands that we respond with: “That’s a nice list; but here’s what it should have had…”

A recent list (on The Observation Deck) of the greatest science fiction moments that made you “weep for joy” made me think of SF’s greatest visual moments from my memory, and I realized that my list couldn’t include just F@&# YEAH! moments, but heartbreaking moments as well.  After all, SF’s greatest trait is its ability to make you rethink your world, and that doesn’t just come from cool explosions.

So, without further ado, and in no particular order, is my list of the greatest SF (visual) moments of TV and cinema, and how they impacted me. END_OF_DOCUMENT_TOKEN_TO_BE_REPLACED

Science fiction, like many other things, enjoys cycles.  In SF’s case, those cycles usually involve the relative popularity of science itself: Exploring physics and extrapolating on reality, to discover or speculate more about ourselves and the universe we live in.  When the science part of SF is up, we get novels by scientist-authors like Arthur C. Clarke and Isaac Asimov; we get movies like 2001: A Space Obyssey, The Andromeda Strain and Soylent Green; we get TV series like Star Trek.

When science is down, we get space battles.  We see an abandonment of concepts like science and physics, in exchange for showy action and eye-candy.  We get movies like Star Wars and TV shows like Battlestar Galactica, and we see video games that are devoted to first-person shooters.  More cerebral content, like the movie Solaris or the TV series Caprica, quickly get dumped in favor of The Fifth Element, Aliens or Warehouse 13.

The latest James Bond movie, Skyfall, may not be Bond’s sexiest, over-the-top adventure yet, but it might be his most vital: The theme of the movie is relevance… old vs new… and Bond’s place in the post-Cold-War era.  M and MI6 are similarly attacked—literally and, apparently, easily—as the villain applies the latest computer tools to the old-school organization, and brings into question whether or not this stodgy organization, and its spies, can keep up with the modern era. END_OF_DOCUMENT_TOKEN_TO_BE_REPLACED

The following is a review of Verdant Pioneers from Sift Book Reviews:

Verdant Pioneers was a real page turner for me. I haven’t read a ton of space operas, but I have to imagine this story is one of the better ones. Take a look at the description.

The city-satellite Verdant has spent a year out in deep space, moving from system to system in search of the raw materials it needs to survive, fighting off terrorist factions that seek to force their return to Earth influence, and unsure of Earth’s state. No one on Earth knows Verdant’s status, either, and both sides are afraid of aggression from the other.

And when the deep-space discovery of the age is spoiled by the unexpected disappearance of one of their freighters, Julian Lenz and his staff must make a difficult decision: To take Verdant into hiding, perhaps forever; or to return to Earth, and risk Verdant’s survival.  END_OF_DOCUMENT_TOKEN_TO_BE_REPLACED