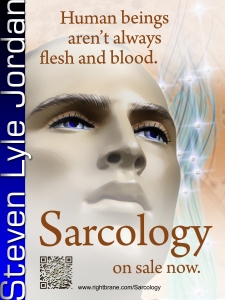 Sarcology ad card, sent to a convention. The entire shipment was lost.

A few months ago I thought I’d give another try to advertising at a convention that I couldn’t attend.  I wish I could’ve been more optimistic about the idea: Two years ago, I sent a box of beautifully-printed promo cards to a convention, paid to be added to every swag bag at the con; the entire box was lost by the con managers; I was refunded my distribution money, but naturally I lost the printing cost… and no one ever saw a single card.

Nevertheless, I decided to try for something I knew would be seen: placing ads in the con program book.  Everyone gets a book—many people even hold on to them as souvenirs of the con—and assuming they were printed well, it would result in nice snazzy ads in the hands of every convention-goer. 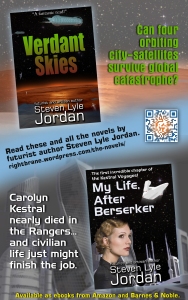 The convention ad, which was seen by thousands of convention-goers.

So I picked two conventions, one which allowed me to place a full-color back page ad (very prominent), and another which gave me in-book space for a greyscale ad.  Altogether I spent about $250 for the combined ads to be placed, and whipped up a nice promo of multiple books to send to both.  The books I chose, Verdant Skies and the first Kestral novel, were designed to appeal to lovers of both serious and lighter science fiction, to pull in the largest potential audience.  (Pretty girl on a cover… I figured that wouldn’t hurt, either.)

The other day, after the first con was over by a few weeks, I received complimentary copies of the program with the full color ad.  Good news: The ad looked great, a gorgeous print job, and I complimented the con for it.  Double-good news: I saw blog hits of roughly 1,000 to 1,500 visits during the days of the con, about half through Facebook referrals, compared to my usual 30-50 hits a day, or 1-200 after a particularly well-received post.  (Disclosure: A great deal of those were about the post for the Neptune Hub, and many driven by the Neptune creators.)

As I said, con visitors often hold on to programs; so it’s always possible that at some time in the future, someone will pick up the program or show it to a friend, they’ll see my ad, and decide to check out my site and buy a book or eleven.  But seeing no sales, either during or immediately after the con, when people were visiting, would have been more attuned to the material and more likely to check something out, told me all I needed to know.

After appearing as a panelist at a pretty sizeable con, and seeing no sales results from that, I’ve come to the conclusion that such indirect promotional efforts are quite clearly pointless… I won’t be doing them again.  Some authors I’ve spoken to have recommended attending the cons, setting up a booth, and selling physical copies of their books at discounts, autographing and hobnobbing with the guests… but they all also admit that they do that at a loss, and none of them admit to seeing huge sales surges or profits thanks to those promotional efforts. 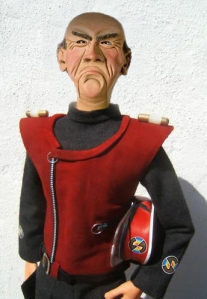 So, it’s back to the drawing board… and I confess two things: One, that there’s not much left on this board to draw from; and Two, I happened to realize that as I started to write in 1995, this means I’ve been trying to sell my books and make money off of this gig for twenty years now… with effectively zero success.  Not something I want to contemplate in the same year that I’m going to see my 55th birthday.  Cue existential crisis mode, say hello to Captain Grumpy Pants (who has become my official spirit guide), and hide the breakables.

2 thoughts on “Another promo fail”